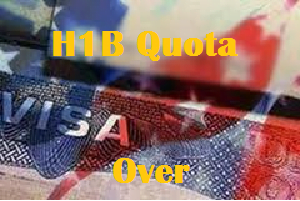 News: USCIS announced that the H-1B cap for this year is full. What does this mean for you regarding job opportunities after MS in the US? The economy is showing signs of healthy job growth for non-US citizens in the US! Its getting better.

On the first business day in April, U.S. Citizenship and Immigration Services opens the rounds of petitioning for coveted H1-B visas for highly skilled foreign workers. The agency awards the 85,000 visas on a first-come, first-served basis and companies scramble to get in their applications for foreign hires as quickly as they can. The cap has been the same since 2004, with 65,000 slots for foreign hires and 20,000 spaces reserved for graduates of U.S. universities. This year human resources managers, knowing the cap was close to being filled, worked through the weekend, racing to file.

The speed at which the cap is reached is a loose indicator of the economy’s state. In 2007, the slots filled up on May 26 (July 26 for university grads). In 2008, the cap was reached in a single day: April 2. In 2009, applications were sluggish and took eight months to reach the cap. In 2011, the slots were filled in seven months.

It now appears that things are picking up again—a good sign for the economy!

PS. If the situation gets too hot, we may end up in lottery like scenario, but even then its better than 2007-2008 as we now have a cap gap and a 27-month OPT extension on F1 for STEM.