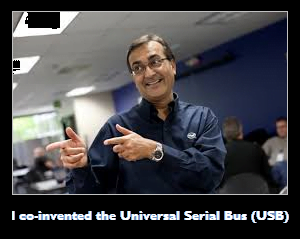 If you use a desktop, laptop, mobile phone, tablet or external hard disk drive, it’s impossible not to know about the USB (universal serial bus) port. The news is that this port, used to transfer both information and power between devices, is now about to become more versatile – there are plans to make it flippable and also able to deliver the power required by larger networks. But did you know that the inventor of the USB port is an Indian? Well, it’s true and his name is Ajay Bhatt.

After graduating from the Maharaja Sayajirao University of Baroda Bhatt went on to The City University of New York, where he received his master’s degree. In 1990, Bhatt joined Intel Corporation as a senior staff architect on the chipset architecture team. Currently, he holds thirty-one U.S. patents, and several others are in various stages of filing. Some time ago IEEE Spectrum did an interesting interview with him about how Intel made the USB truly universal and other things like an ‘all-day’ computer project he is working on (read: a computer that you can use all day on a single charge) and some of his past achievements (click here to see “Ajay Bhatt: Intel’s Rock-Star Inventor”).

However, despite his ‘rock star’ inventor status Bhatt is only one of a highly talented group of Indian movers and shakers in the field of technology in the US. Here are few of the many other outstanding achievers in the list:

• Narinder Singh Kapany, an engineer who is called the “Father of Fiber Optics”

• Sabeer Bhatia who founded Hotmail (there’s a special note of pride here for Pune-ites: Bhatia studied for some time in Bishop’s School in Pune)

• Avtar Saini who co-led the development of the Pentium processor Intel and holds 7 patents related to microprocessor design.

• Arun Netravali who is a pioneer of digital technology including HDTV and MPEG4, a scientist, a former President of Bell Labs and also former CTO of Lucent

These innovators and entrepreneurs par exellence blazed the trail that you are following. They did their initial engineering studies in India, went for higher studies in the States and then joined American companies there where their careers took off.

Bhatia, for example, got a foreign transfer from BITS Pilani, Rajasthan to California Institute of Technology where he earned a Bachelor’s degree. He then earned a Master’s degree in electrical engineering from Stanford University.

Krishna Bharat received an undergraduate degree in computer science from Indian Institute of Technology, Madras and then went on to earn a Ph.D. from Georgia Tech in Human Computer Interaction.

Arun Netravali received his undergraduate degree from the IIT, Mumbai and an M.S. and a Ph.D. from Rice University in Houston, Texas all in electrical engineering.

So, as you start your own journey to higher education in the States, here’s hoping that at the end of the trail you will find a portion of the success and glory that these greats did.