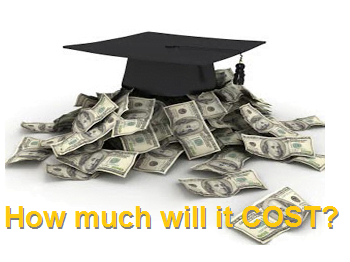 Many Indian students are concerned about the cost of higher education in America and seek information on opportunities for financial assistance. The cost of education in the United States ranges from $14,000 to over $40,000 per year, with State universities and institutions in the South and Mid-West are often being cheaper than private institutions and those located in California or the North-East region. In addition to tuition fees, books and food, you have to plan for expenses towards housing, health insurance and transportation. In fact, a student’s major expenses will be on two major items: tuition fees and living expenses.

1. Tuition Fees
There is wide variation in the tuition fees charged by American universities, ranging from $12,000 to $30,000 for a full academic year covering 9 months. The quality of teaching or the reputation of a university, however, is not directly proportional to the tuition fees charged by it. In fact, the annual tuition fee is low in some of the most reputed universities funded by State governments, but high in privately funded institutions. In State-funded universities, permanent residents of the State pay much lower tuition fees than out-of-state students, a category which includes foreign students.
2. Living Expenses
This amount will vary with the location of the University and will depend on whether the location is a metropolitan city such as New York, Chicago, Atlanta or San Francisco, or is a relatively small city such as Cincinnati, Phoenix or Albany, or a university town such as Amherst, Purdue or Hempstead. But since the prices of essential food articles such as milk, bread, vegetables and eggs are uniform almost throughout the United States, the difference in the students’ cost of living will be mainly attributable to the different levels of house rent in different places.
Many universities themselves provide accommodation facilities to a large number of their students. In addition, in and around almost all universities in America, houses are available with two to four independent rooms with a common lounge kitchen and toilet. Typically, two to four students rent a house together. Each student gets an independent bedroom, but shares the other facilities with his roommates.
Since food cooked at home is much cheaper than restaurant food, house-mates usually cook by turn and share the total kitchen costs. Most students – even those who rarely venture into the kitchen at home – become expert cooks during their stay in the United States.
As a rule of thumb, on may say that accommodation for one student costs between $ 350 and $ 450 dollars per month. One has to live very economically while pursuing an education in America.
Must Read Blogs:
How do I Fund My Studies in an American University?
Kinds of Funding Available in American Universities