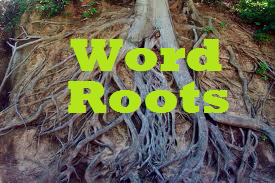 Starting this week, we are introducing a new feature that will help all you students who are struggling to prepare for the GRE test – posts that will help you learn the GRE test words using roots. Though the technical meaning of ‘roots’ is a little different, here it is useful to think of them as the original Latin and Greek words that the English words came from.

Learning words through their roots is useful in two ways – firstly, knowing the root and meaning of a word can help you understand why the word means what it means. Secondly, since there are often many words which come from the same Greek or Latin root, this helps you to learn several words at one time. It becomes easier because, as you will seen in today’s post, words from the same root look similar and also share a common set of meanings. The two lists below, which cover 32 words totally, will illustrate how this is so.

The Latin word currere (to run) produces many English words:

The Latin word vertere, to turn produces a large number of English words:

Hope you found this helpful – roots are a great way of preparing for the GRE test words. If you did here’s a link to our next post on roots click to see next post.